And so it ends. The Web Summit on Irish shores finished on Thursday (for now), and I must admit there was an athmosphere of “what if” and that of sombreness. But we cannot allow this to affect our perspective and thinking of the impact this conference has had on Ireland tech landscape.. Paddy Cosgrave has built a conference which he began with 400 attendees to now 35,000. Let’s put that into context in regards to people’s perspective of Ireland as a Tech Hub. With over 100 countries represented, and technology itself ensuring their own tech landscape is quite small, the voices of the 35,000 will translate into millions. And I am certain the conversation will be about Web Summit, the friendliness of the services and the vibrant Night Summit, and not the number/cost of hotels, government and traffic.

Wednesday was a great day and one of the best I have had at a web summit event. It’s started on the Machine Stage, where a panel including Nell Watson from Singularity spoke on how machines and humans will coexist and complement each other in our smart future. I liked how Nell spoke about how the seamless integration of machines, and the governance of same will be a key piece of the puzzle.

Next up on Machine was another panel, which included Dr. Joe Salvo from GE and Dr. Said Tabet from EMC. The panel was expertly hosted by Ed Walsh who is the director of technology vision for EMC. Whilst interviewing the guys, Ed brought out not only the technology vision required for IoT, but also the collaboration that can be enabled by consortiums like the IIC, of which Dr Salvo and Dr Tabet have been so instrumental in building. As already mentioned, the proliferation of Virtual reality was evident, and I got a demo of Amazons audible technology! It was quite neat!

Friday was a more relaxed day, with numbers down a little but this allowed for a different kind of networking experience. It was a day to chat with as many startups as possible, and to catch some great talks. One that stood out was on centre stage, where a panel (including Christine Herron from Intel Capital, Albert Wenger from Union Square Ventures, Mood Rowghani from KPCB ) was hosted by Charlie Wells of the Wall Street Journal. Topic discussed – tomorrow’s tech landscape. A growth or just a bubble?

Well it looks like what Nell mentioned above is already happening from who I bumped into! 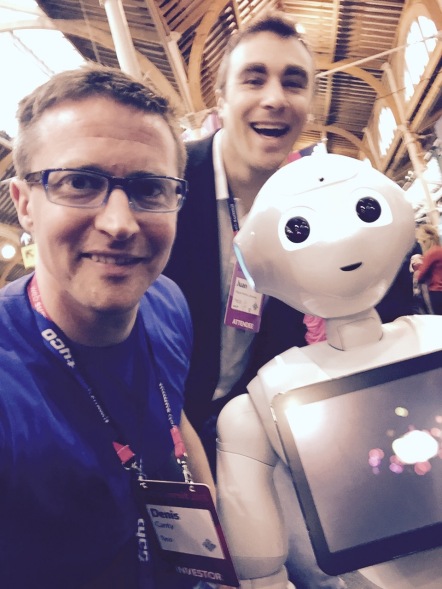 And so, we are off to Lisbon. Whilst I believe that there will be challenges there also, it is Cosgraves personality that will shine through. An excellent CI labs data science company spawned out of the web summit, and whist there is that data science feel to a lot of the web summit, it’s this personality of Cosgrave and his team that still makes this event stand above many. 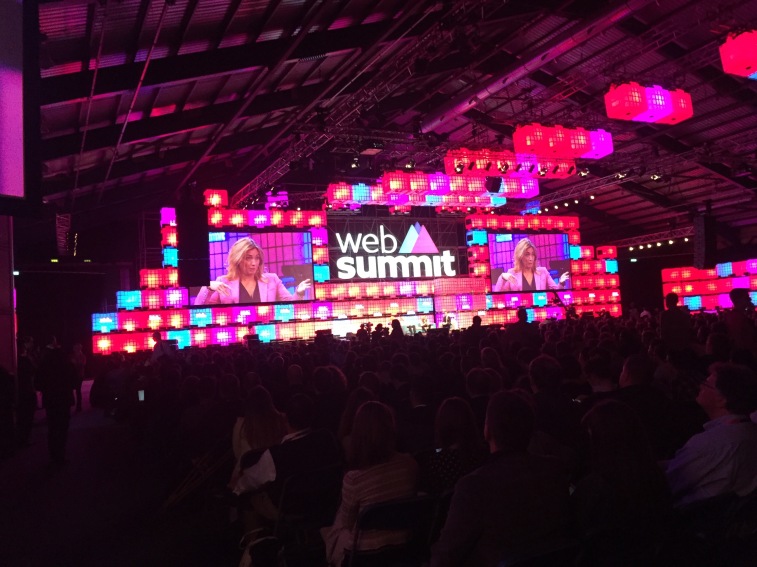 DENIS CANTY IS EXCITED TO BEGIN IN JULY 2017 WITH MCKESSON, A FORTUNE 5 COMPANY – AS THEIR SENIOR DIRECTOR OF CYBER SOFTWARE ENGINEERING IN CORK. HIS LAST ROLE (TO JUNE 2017) WAS AS THE LEAD TECHNOLOGIST FOR IOT WITH JOHNSON CONTROLS INNOVATION GROUP BASED IN CORK, IRELAND. THAT ROLE MEANT COLLABORATING EXTENSIVELY BETWEEN HIS TECHNICAL AND SALES TEAMS TO DRIVE FURTHER COMMERCIALISATION OPPORTUNITY THROUGH TECHNOLOGY (BOTH OUR OWN AND PARTNERS/STARTUPS) INTO OUR SALES CHANNELS, SPECIFICALLY LOOKING AT THE EMERGING SMART BUILDING MARKET. THE PROJECTS INCLUDE OUR EXISTING TECHNOLOGIES – BUILDING SECURITY, RETAIL, HVAC AND BUILDING ENERGY – AND EMERGING TECHNOLOGIES SUCH AS IOT, AR AND MACHINE LEARNING. A KEY COMPONENT WAS TAKING KEY INPUT FROM NUMEROUS STAKEHOLDERS AND PROCESSES TO DELIVER ROI FOR CUSTOMERS AND PARTNERS. HE THEN LED THE TEAM TO BUILD AND DEPLOY THE SOLUTIONS IN AN LEAN AGILE MANNER. DENIS SPOKE ON THE NATIONAL AND INTERNATIONAL CIRCUIT FOR JOHNSON CONTROLS AT NUMEROUS TECHNOLOGY CONFERENCES. HIS LEADERSHIP STYLE IS LEADERSHIP THROUGH TRUST AND DELIVERY, AND I TAKE RESPONSIBILITY FOR MY TEAM, COMPASSION AND HUMILITY ARE ALSO IMPORTANT AS A LEADER IN MY OPINION. I LIKE TO BUILD A BALANCED CULTURE, WITH THE PEOPLES PERSONALITIES IMPORTANT INPUTS INTO THAT. DENIS HAS A DEGREE IN ELECTRONIC ENGINEERING (2H) FROM CORK INSTITUTE OF TECHNOLOGY, A MASTERS IN MICROELECTRONIC CHIP DESIGN (1H) FROM UNIVERSITY COLLEGE CORK AND A MASTERS IN COMPUTER SCIENCE (1H) FROM DUBLIN CITY UNIVERSITY. PRIOR TO JOHNSON CONTROLS, DENIS HELD A POSITION OF PRINCIPAL DATA ARCHITECT AND DEVELOPMENT MANAGER WITH EMC FROM 2010 TO 2015, SPENDING 2011 IN SILICON VALLEY. HE LED A TEAM FOCUSED AT REDUCING AND CONSUMING NINE TEST AUTOMATION PLATFORMS FROM EXTERNAL MANUFACTURERS TO ONE EMC CLOUD HOSTED PLATFORM. HE ALSO WORKED ON A NUMBER OF WORKFLOW AUTOMATION SOFTWARE REPLACING TEDIOUS MANUAL EXTRACT, SEARCH AND REPORT COMPILATION THAT RESULTED IN EFFICIENCY GAIN (WRITTEN IN PYTHON). I ALSO BUILT PREDICTIVE ANALYTICS APPLICATION IN MANUFACTURING AND DATA SCIENCE MODELS FOR THE CUSTOMER VERTICAL WITH THE CTO OFFICE. DENIS BROUGHT MICROSERVICES BASED DESIGN ALONG WITH DISTRIBUTED STORAGE AND PROCESSING TO THE GROUP, CHANGING THE DEVELOPMENT CULTURE IN THE PROCESS. DENIS WAS ALSO A MEMBER OF EMC’S GLOBAL INNOVATION COUNCIL AND AS AN AMBASSADOR WITH THEIR OFFICE OF THE CTO, LEADING THEIR CUSTOMER INSIGHT SOFTWARE DEVELOPMENT. DENIS WON TWO GLOBAL INNOVATION AWARDS IN HIS TIME WITH EMC, IN THE AREAS OF SUSTAINABILITY AND E-SERVICES, AND HAS A PATENT IN INTELLIGENT POWER MANAGEMENT ON STORAGE ARCHITECTURE. HE ALSO WORKED PREVIOUSLY FOR ALPS AUTOMOTIVE DIVISION FROM 2005-2010, IN A VARIETY OF ROLES, INCLUDING AS THE LEAD COMPUTER VISION ENGINEER, AND THE LEAD TECHNOLOGIST ON EUROPEAN RESEARCH PROJECTS IN THE AREAS OF IN-VEHICLE DISTRACTION MONITORING AND SMART HOME DEVICES. DENIS ALSO SPENT TIME CONSULTING IN THE START-UP WORLD, SUCH AS A HEALTHCARE INFORMATICS CONSULTANT WITH ACE HEALTH, LEADING THE DEVELOPMENT FOR AN APPLICATION WHICH HELPS HEALTHCARE SERVICE PROVIDERS ACHIEVE BETTER PATIENT OUTCOMES AND CUT COSTS THROUGH A REGULATOR-APPROVED PREDICTIVE ANALYTICS PLATFORM IN THE DUTCH AND US MARKETS. HE ALSO HAD HELPED NUMEROUS STARTUPS ON BUILDING THEIR TECHNOLOGY ROADMAP TO ALIGN WITH DEFINED TARGET MARKETS AND CUSTOMER BASES. View all posts by deniscanty